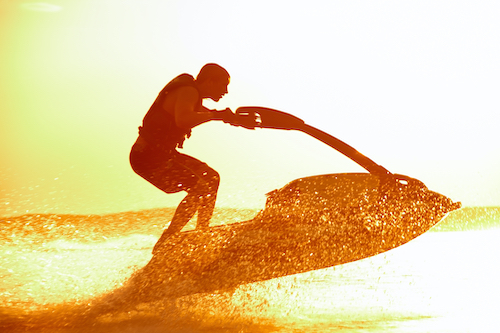 Do you want to stand-up or sit-down? Are you looking for speed and acceleration or seat and storage capacity? In this article, we explain all  differences between Jet Ski, WaveRunner and Sea-Doo.

I’m pretty sure that many among you refer to all types as “jet ski”. However, their exact technical name is Personal Water Craft (PWC) or water scooter. In fact, Jet ski is only one brand’s name among a broad range of PWC models.

Historically, the first PWC prototype was a stand-up model that Clayton Jacobson II invented. He then entered a licensing agreement with Bombardier Recreational Products (BRP). The Canadian company gets credit for introducing the first sit-down Personal Watercraft in the 1960s, although it encountered limited success at the time.

Shortly after the introduction of PWC, Kawasaki registered the trademark for a new stand-up model: the Jet Ski.

And this is how the stand-up vs sit down PWC or Jet ski vs Waverunner arguments began.

When it comes to luxury yacht charter, three notable brands of recreational watercraft are almost always available onboard: Jet Ski, Waverunner, and Sea-Doo.

Let’s find out which one is best for you.

Since Kawasaki introduced the first commercially successful PWC called “Jet Ski”, it has gradually become a generic name for all types of Personal watercraft and stand-up models.

For a long time, Jet Ski was the only PWC model available.

Until the introduction of the sit-down WaveRunner by Yamaha.

As an expert, I always recommend the stand-up Jet Ski. If you are looking for extreme fun and a wild adventure, you will not be disappointed.

In the mid-1980s, Yamaha Motor Corp joined the PWC industry. At that time, Kawasaki and its stand up models were dominating the industry. But Yamaha’s line of PWC brought a real change to the market.

The WaveRunner from Yamaha was the first sit-down PWC able to carry either one or two-persons. After its commercial success, the brand’s name WaveRunner has become a generalized trademark for any sit-down PWC.

Yamaha was faithful to its traditions in motorcycles production. The WaveRunner is a perfect combination of cutting edge performance and luxury. Which is why its WaveBlaster and SuperJet models are two of the most popular PWC produced by Yamaha.

The Yamaha SuperJet is highly regarded among stand-up enthusiasts and stands as a real competitor to the Kawasaki Jet Ski. All the models are hand-built in Japan!

To sum up, the Jet ski vs Waverunner’s argument is almost the same as Kawasaki vs Yamaha. The only difference is that Yamaha has a broader range of PWC, and can therefore satisfy more needs outside the pure performance.

Share the fun time with your family and kids with the multiple-person sit-down WaveRunner. You can find various models of WaveRunner on board of Lauren L, Quantum, Tatiana which are all available for luxury yacht charter in the Mediterranean.

20 years after its withdrawal from the industry, Bombardier Recreational Products came back on the market to challenge PWC manufacturers. As an “new old” competitor, it quickly became a real challenger for both Yamaha and Kawasaki.

Produced from 1989 to 2003, the Sea-Doo XP model was a revolution in PWC world. The XP was even named “Watercraft of the century” by Watercraft World magazine. It was the first high-performance version of a sit-down PWC.

The success story doesn’t end here. In late 2014, Bombardier launched Spark. The idea was to change the whole industry by bringing a cheaper and lighter PWC that would guarantee a maximum of fun for everybody.

Different models of Sea-Doo Bombardier are available on Seven Sins and Memories Too, some of our luxury yachts available for yacht charter in the Mediterranean.

These three companies are currently the most active in the personal watercraft market. They are also competing to attract more adrenaline enthusiasts among yacht charterers!

If you are a total beginner and don’t want to invest, pick a low-end seadoo. If you want a more comfortable jet ski with a good balance between comfort, performances and price, then Yamaha Waverunners should be good for you. If you want the fastest jet ski, then Kawasaki lines will have what you are looking for.

These are of course general guidance, each of these three brands have jet skis that can accomodate a large variety of uses, and the final choice for most people is usually a simple matter of personal preferences.

Which is best : a Jetski or a Waverunner?

Both are great PWC. The Jetski was the original PWC produced by Kawasaki while the Waverunner was the one from Yamaha. Both offer a powerful riding experience. The best depends on personal tastes and preferences between Kawasaki and Yamaha brands.

Which is best : a Yamaha PWC or a Kawasaki PWC?

Yamaha PWC is called a Waverunner while Kawasaki PWC is known as a Jetski. Both are powerful PWC brands similar in nature. Yamaha have some cheaper options while Kawasaki focuses more on performance PWC.

Which is best : a Jetski or a Seadoo?

Jetski was the brand name of the original PWC produced by Kawasaki while the Seadoo was the one produced by Bombardier. Both are great PWC. Seadoo range is larger, while Kawasaki range of jetski focuses on performances. Seadoo are usually more recommended for beginners.

What is the fastest between a Kawasaki Jetski, a Yamaha Waverunner and a Seadoo?

Kawasaki Jetskis are usually the fastest, followed by Yamaha Waverunners. Seadoo tend to be less powerfull which is why they are usually recommended to beginners.

Which PWC are onboard of luxury yachts?

Do I need a license to drive a jetski?

Every country has its own regulations regarding PWC. Some have age restrictions, others restricted areas and sometimes mandatory equipment or licenses to carry with you while riding.

How fast can a Kawasaki jetski go?

Kawasaki slowest jetski have top speed around 55mph while the fastest jetski can reach 67mph. Most Kawasaki Jet skis can go over 60mph.

How fast can a Yamaha Waverunner jetski go?

A Yamaha Waverunner top speed ranges between 50mph to 67mph. Most waverunners can go around 55mph.

How fast can a seadoo jetski go?

A few low end seadoo have a top speed of 42mph. Fastest seadoos can go up to 67mph. Most of seadoos models have top speed between 50mph and 55mph.

Which is best: a stand-up or a sit down jetski?

Which brand is offering stand-up jetski?

At the moment, only Kawasaki and Yamaha have stand-up PWC. Sea-doo does not produce any.

Which one is your favorite? The stand-up or the sit-down? The single or the multi-person family craft? Share your experience with us in the comments’ field below !

Water toys and leisure amenities play a crucial role in the choice of boats for a yacht charter. We talked about the novelties in the world of water toys in our previous articles:  the Freestyle cruiser slide, the Seabreacher, and the Jet Capsule.

How to Choose the Right Yacht Broker?

Trimaran vs Catamaran: What are the Differences?

LEEN 72′ : The Future of Hybrid Trimarans is Here