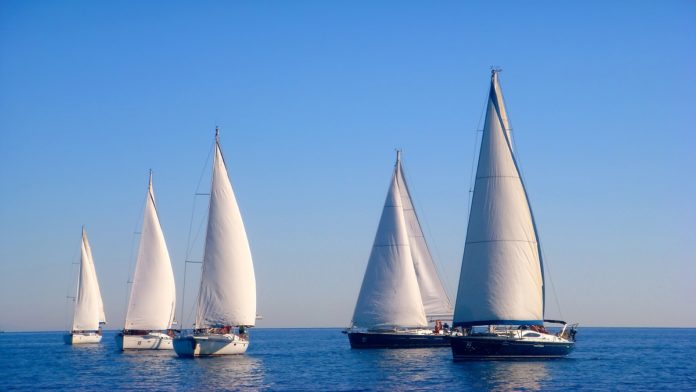 To get into sailing, it is necessary to know every part and component of your vessel.

Want to know what the parts of a sailboat are? Follow our guide.

Names of the main parts of a sailing boat

The hull, a mandatory part on all boats

For most people, the hull represents the boat itself. It is the hull that provides the buoyancy of the vessel and carries everything else: sails, masts, rigging… Sailboats mainly use displacement hulls, a shape that displaces water during the crossing.

The helm, essential for steering

The helm is used to steer the ship in the desired direction. A sailboat is steered either by a “tiller” or a “wheel”. This installation very often depends on the size of the sailboat.

The tiller is usually fitted to small boats and is attached directly to the rudder (see below); it is not really intuitive to use since the boat steers in the opposite direction to the one in which the tiller is moved.

The rudder tiller is a metal plate placed at the back of the boat directly attached to the tiller, allowing the boat to be steered by setting a course.

The mast, crucial for a sailboat

The mast is the long vertical pole that holds the sails. It is usually positioned at the front and gives the boat its particular shape and style.

The sails, the essential element to move forward

The sails are an assembly of fabric pieces, whose size can vary from a few square meters to several hundred. It is thanks to the action of the wind on the sails that you can sail.

The rigging is the set of fixed and mobile parts that allow the propulsion as well as the maneuvering of a ship by the force of the wind. It is composed of all kinds of lines, ropes, fittings, spars, masts, sails…

The bow represents the front part of the boat. It is also called “bow” because it is the pointed part that crosses the water. The shape of the bow determines in part the boat’s handling.

The stern is the rear part of the ship. For example, when the wind is blowing at the stern, the boat moves fast, hence the expression “having the wind at the stern”.

The keel, an essential counterweight

Sailboat hulls are very round and smooth, they are very efficient and comfortable. But this also makes them very easy to capsize… think of a kayak for example. The keel is a large fin that compensates for this tendency to capsize by providing a counterweight. It is usually placed to create a counterbalance to the force of the wind on the sails.

The rudder blade is a wing that steers from left to right. Together with the tiller, they make up the rudder.

The boom is a pole fixed horizontally to the mast. It allows to maintain the mainsail in place.

The mainsail is the largest sail on the ship located on the main mast. Most sailboats use a sloop rig (a single mast with a bermudagrass mainsail) and are therefore easy to recognize.

The jib refers to a headsail that is triangular in shape. It is much thinner than the other sails and is used when the wind is strong.

The anchor is a piece of steel that is part of the rigging and is dropped by a chain to the bottom of the water. It is placed there to hold the boat at anchor.

The Compass, the guide of every good navigator

The compass is usually found in the cockpit. It is the oldest navigation tool on the market and one of the most reliable.

Used by most captains nowadays, the chartplotter allows to display a map and a position in real time. It can be compared to a car GPS.

Read also : How to sail upwind?

The interior of a sailboat

The companionway is the staircase that allows access to the interior of the boat.

The saloon allows you to take your meals inside. The benches on the sides can be transformed into a bunk for sleeping. There is also storage space in the cupboards on the sides and the lockers under the benches.

The chart table contains all the electronics: GPS, radar, the electrical panel, the on-board computer and allows you to store your nautical charts.

In a sailboat, space is limited, so avoid leaving with several suitcases and opt instead for a soft bag that you can store in the closets. Also, remember to close the portholes when sailing! Not far away you will find a toilet, a sink and sometimes a shower.

Generally consisting of a gas stove, an oven, a refrigerator and a sink. Water is stored in tanks and sometimes a seawater supply is convenient to save drinking water.

The sail locker is used to store the sails and the equipment to sail away from water and humidity.

To go further in your personal knowledge, you should know that according to the size and the number of masts, the sailboats do not all have the same name. Here are the 4 most common.

What is a sloop sailboat?

A sloop sailboat has only one mast. It is on this model that we have listed the elements of the sailboats above.

What is a ketch sailboat?

The ketch sailboat has 2 masts, one at the back called mizzen mast and the second one which is bigger. The mizzen mast is located in front of the rudder.

It was very much used as a fishing vessel thanks to its maneuverability in all weathers.

What is a Yawl?

The Yawl sailboat also has two masts. Unlike the ketch, its aft mast is aft of the rudder.

What is a schooner?

The schooner has two masts of identical size. Its forward mast is called the foremast.

Trimaran vs Catamaran: What are the Differences?