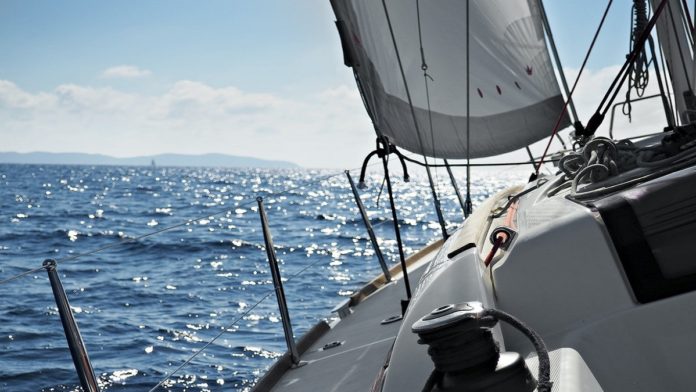 The wind, this invisible force, personified and divinized in mythology and religion, has been harnessed throughout human history. The earliest recorded evidence of wind energy being used dates to around 5000 BC in Egypt, where the sail was invented to catch the wind and propel boats along the River Nile. From ancient until present times the wind has always been and still is the crux of sailing. One of the first sailing fundamentals you learn when you are new to this world is upwind sailing.

What does this mean? How does a yacht sail upwind? Read on and you will know it all.

What is upwind sailing?

Let’s start with a simple and short definition: upwind is when going against the wind. However, not directly against the wind. That is physically impossible. “Sailing upwind” means sailing as close to the direction the wind is blowing from as possible; in a word, about 45 degrees away, left or right, from the apparent wind’s direction. What if crossing this imaginary line with steering the boat closer into the direction of the wind? the sails start to flap around and the boat slows down. As old sea-dogs say: flapping sail, unhappy sail!

The main differences between sailing upwind and downwind

While sailing upwind means going against the wind, sailing downwind is going with the wind. It is simply the opposite and the major difference between the two of them.

Another important difference involves how the boat is steered and the sails trimmed.  Going upwind, one generally pulls the sails all the way in and then uses them as a guide to steer the boat.  When sailing downwind, one usually aims the boat straight to the desired course, and then uses this heading as a guide for how to trim the sails. Upwind sails work like airplane wings. They are trimmed to give lift. Downwind, the air is behind the sails, and they drive the boat by filling and pulling it.

As we have seen above, sailing upwind means sailing towards the general wind direction but not directly into the wind; the sails would flutter and the boat would stop. Instead, sailors use a zigzag motion with moving the bow of the boat, left and right, through the wind in order to make headway.  This tactic is called “tacking”.

This sounds a very simple thing to do but, in fact, it is tough to be good at. This requires some cooperation from the crew and commands will keep everyone working together. Tacking is teamwork and strength lies in numbers!

Let’s continue with the essential vocabulary mastery. A series of tacking moves, in a zig-zag pattern, is called beating. The opposite manoeuvre to tacking is called jibing. A jibe consists in turning the stern of the boat through the wind so that the wind changes from one side of the boat to the other side. It allows sailing upwind in the desired direction.

When facing the wind and its various caprices, the art of sailing is real choreography!

How to tack a sailing yacht to sail upwind

Let’s now get to the heart of the matter: the technical aspect of tacking a sailing yacht to sail upwind.

A good communication and a coordinated team are a must when tacking a sailing boat.  To follow, the different steps of the process but before a brief glossary of the key terms.

Port and starboard refer to the left and right side of the vessel, not the observer.

Port Tack: port tack is when the wind is blowing from the port side (left) of the vessel.

Starboard Tack: a boat is on a starboard tack if the wind is coming over the starboard (right) side of boat with sails on port (left) side.

Jib Sheets: ropes and lines to trim or “sheet” the jib.

Working sheet: jib sheets that are actively trimming the jib. They are tight on to the clue and pull out and trim the jib sail.

Main sheet: Rope that is attached to the boom and is used to control the mainsail.

How to tack a sailboat properly in 10 Steps

1- The skipper makes sure that the new course is clear.

2- If that is the case, he shouts “Ready about” to the crew members to be ready. The perfect translation of “Ready about” would be ” before I throw the helm over, are you ready to let go of the old jib sheet, trim in the new and move to the other side? ».

2- He now waits for them to prepare the sheets and lines for managing the sails.

4- In the meantime, the skipper estimates the lay line, that is to say where the boat is going to be pointing after the tack. When sailing upwind the lay line is generally 90 degrees to your left or right from where you stand now. This step is essential.

5- When the skipper hears “Ready” or “All clear” from the crew, he responds “helm to lee” to notify the crew that he is about to start the tacking manoeuvre by turning the steering either to portside or starboard side. When the wind starts blowing the jib to the lazy-sheet, it is the time to stop turning.

6- Then, with calling Lee-Ho or Hard-a-Lee, the skipper announces he is turning the boat towards the wind. The vessel is tacking. As the headsail starts to flap, the crew on the working sheet eases and releases the sheet from the winch.

8- The boat continues to turn through wind and the jib blows across to the new side, flapping a little as it goes.

9- This is the good time for the crew on winch to pull in the new working sheet and start pulling in the line on the lazy sheet (now being working sheet) on the other side. The main sheet needs to be tightened in the centre of the boat.

10- The sailboat starts to pick up speed at about 90 degrees off from the original course. The skipper keeps the tiller in the middle. The crew starts to trim and adjust the sail. The tack has been successfully performed!

The operations of sailing a multihull and a monohull are basically the same. Basically, but not exactly. One of the main differences is in tacking. A monohull, much easier to manoeuvre, will tack quickly and is faster to respond to the helm than a multihull. Conversely, tacking with a multihull can be quite challenging. Because of its lighter weight, wider beam and windage, the multihull will suddendly slow whereas the tacking requires a sufficient speed not to lose too much forward momentum.

The 5 Best Sailing Boats under 60 feet

Our selection of the Best Power Multihulls for 2022