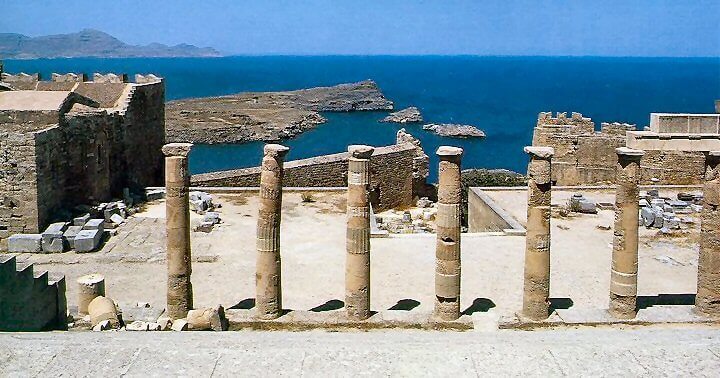 The Dodecanese is a group of over 160 Greek islands in the Aegean Sea, of which 12 are of a more notable size, historically the most important and best known is Rhodes

And there are plenty of good reasons that The Dodecanese and Rhodes are among the most desirable touristic  destinations in the world.

Yachting in the sunniest part of Greece is simple when you charter a boat on the island of Rhodes.

It is the perfect getaway to the south-eastern Aegean for sailing the Dodecanese Islands: Kos and Patmos, Kalymnos, and much more.

The island of Rhodes is the biggest island of the archipelago called the Dodecanese, and it is the capital of the group of Greek Islands. The principal town of the island and seat of the municipality is Rhodes.

The island of Rhodes has many spectacular beaches and sandy coves. The beaches on Rhodes have crystal waters, and they are unique in every way. The island offers an array of beaches with varying amenities, including taverns, restaurants, bars, cinemas, clubs, and watersports.

The climate of Rhodes is a mild Mediterranean climate characterized by sunny and dry summers and mild winters.

Historically, Rhodes was famous worldwide for the Colossus of Rhodes, one of the Seven Wonders of the Ancient World. The medieval Old Town of the City of Rhodes has been declared a World Heritage Site.

In fact, in 1309, the island was occupied by forces of the Knights Hospitaller. Many of the city’s famous monuments, including the Palace of the Grand Master, were built during this period.

There are a lot of villages in Rhodes: Lindos, Afandou, Apolokia. Many more can be found around the island, especially some picturesque mountainous villages that charm visitors, far away from the island’s high touristic activity.

Rhodes is one of the most popular destinations in Greece thanks to its spectacular landscapes.

Rhodes has five ports, three of them in Rhodes City, one on the west coast near Kamiros, and one on the east coast near Lardos. Begin your yachting trip from the island of Rhodes and continue to the Greek Islands and Turkey!

Byzantine churches , medieval castles, the Palace of the Grand Master of the Knights of Rhodes, the Suleiman mosque and many other monuments are still unspoiled by the passage of time, and bear witness to the different eras that Greece has been through – from the Classical period, the middle ages, Ottman and Italian rule. Wandering around Rhodes is like travelling in a time machine. The Medieval City of Rhodes fully deserves its UNESCO world heritage label.

One specific feature of the Dodecanese is the diversity it offers. Each island in the Dodecanese has something different to be explored. The Dodecanese should not only be seen as Rhodes and Kos, famous though they are. If you are keen to discover lesser-known, unspoiled destinations, you can visit Karpathos, an island blessed with an abundance of streams, pine-tree forests, vineyards, olive groves, rocky caves and mountainous landscapes. Karpathos is a paradise for nature enthusiasts. You should also visit Nisyros , an unspoiled destination formed by volcanic eruptions. Take the opportunity to visit the Volcanic Museum, the only one of its kind in Greece, where there are samples from the most characteristic volcanic rocks of Nisyros.

The Dodecanese shorelines are world-famous due to their turquoise clean waters. Rhodes and the other islands that form the Dodecanese are one of the most popular luxury yacht charter destinations in the world.

A luxury yacht charter in Rhodes and the Dodecanese is a great way to enjoy the fabulous waters.

Whether swimming, diving, snorkeling, sunbathing or exploring several pristine islands away from the city hustle; the Dodecanese will promise a unique and exciting holiday experience.

And here is our selection of yachts  we have chosen for your yacht charter in Greece :

8 reasons to yacht charter in Sicily

7 reasons to experience a luxury yacht in Italy

The 5 Reasons Why You Should Use A Travel Agent for...