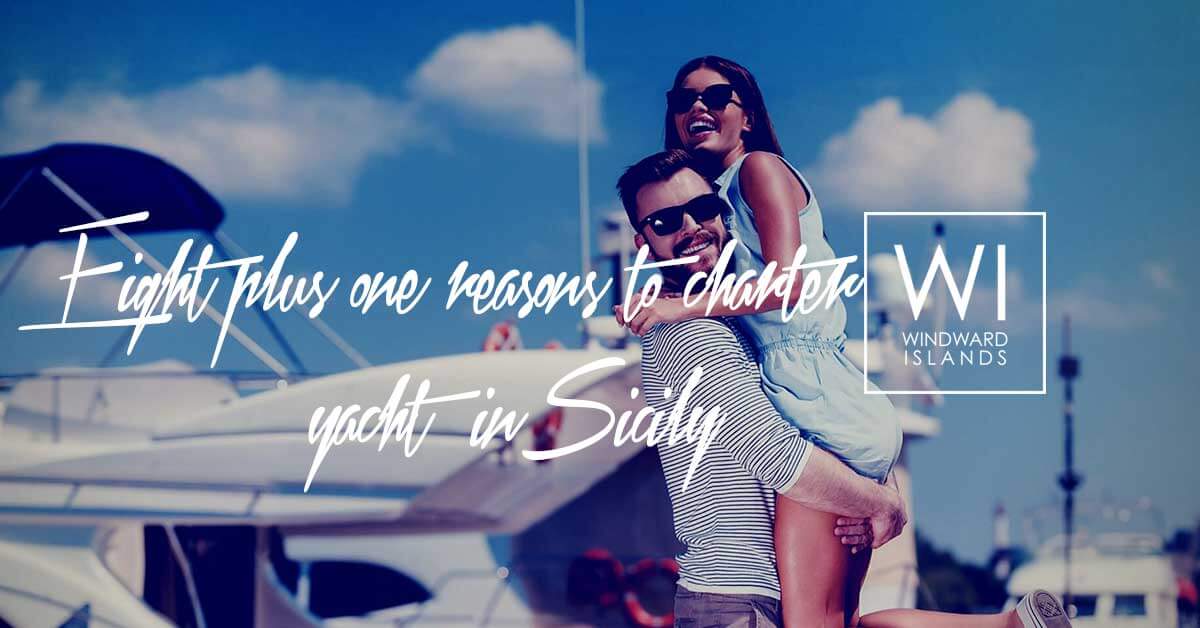 For most people, Sicily only evokes the Godfather trilogy. But this surprising Italian island has much more to offer! Let me give you eight fascinating reasons for spending your next vacation in this Mediterranean gem.

Since Sicily is the biggest island in the Mediterranean, the area provides a lot of things to explore during a European summer retreat. It is famous for its stunning coastline, impressive active volcanoes, exquisite cuisine, and fascinating mix of cultures.

Here are eight fabulous things to do on your trip to Sicily.

Set 100 miles (160 km) away from North Africa, Sicily holds a strategic position in the middle of the Ionian, the Tyrrhenian, and the Mediterranean Seas.

The island was invaded countless times by the Greeks, Phoenicians, Romans, Arabs, Normans, and Spaniards. You can still visit vestiges of these ancient civilizations in several locations.

On Sicily’s northeastern coast, the Greek Theatre of Taormina features a stunning panorama on the Ionian Sea and Mount Etna. This fantastic stone structure built in the third century B.C is still in use for theater, concerts, and ballets.

In the southwest Sicily, the Valley of the Temples (Valle dei Templi) is a UNESCO World Heritage Site that stretches upon 2,000-acre.

The archeological site in Agrigento dates back to the fifth century B.C. Among the remains of numerous Greek temples, visit the Temple of Concordia.

When I think of Italian cuisine, and my taste buds are always exciting. Forget all you expect about Italian dishes like pasta and pizza!

Sicilian food is all about the excellence of the raw products: Extra-virgin oil, Pachino tomatoes, Pantelleria capers, Sweet grapes of Canicatti. You cannot visit Sicily without trying its famous cheese.

Pair a bit of Ragusano and Pecorino with crispy loaves of Dittaino bread. Taste their fruity wines with a plate of Caponata, Sfincione, or Crocchè. End the meal with the mouth-watering Cannoli, the staple of Sicilian pastries.

For traditional dishes, we highly recommend Ristorante Santandrea in Palermo and Ristorante Al Duomo in Taormina.

They both offer a cuisine à la Sicilienne. For an exceptional dining experience, The Michelin starred restaurants La Madia, and Ciccio Sultano are worth the travel.

The 10 best restaurants for yacht charters in the Mediterranean

Sicily is not only the largest island in the Mediterranean; several clusters of smaller islands also border it:

That is why Sicily’s coastline is renowned for its beauty and diversity. Whether you are looking for endless stretches of golden sands, pebbled remote beaches, or impressive cliff drops, you’ll be amazed by Sicily.

There is something for everyone to combine beach time and sightseeing, from busy shores to pristine beaches, unspoiled nature reserves, seaside resorts, deserted coves.

Surrounded by breathtaking mountains, San Vito Lo Capo is one of Sicily’s most famous beaches near Trapani. Set in a curvy bay, it is a haven for beach lovers.

Chartering a yacht on the West coast of Sicily, sail to Favignana, the largest Egadi Islands, you can then take a dip in Cala Rossa, an ancient abandoned quarry surrounding shallow turquoise waters.

On the east of Palermo, Cefalu features a charming beach. But the most spectacular coastline is Scala dei Turchi beach. Impressive white cliffs frame the small sandy stretch called The Turkish stairway. To stay away from the crowd, you can charter a catamaran and dive from the deck.

When to go to Sicily?

Thanks to the warm temperature and low rain, Sicily is a year-round destination. The Mediterranean climate provides a mild, wet winter. October, November, and December are the rainy months.

There are boat rentals in Sicily almost half of the year, from May to September.

For extraordinary pictures and impressive views, go on the top of volcanoes.

Sicilian volcanoes are still very active, spitting fumaroles and projecting lava jets. Mount Etna (Muntagna or Mungibeddu) is the most famous and the tallest with 11,000 feet (3,329m).

More than 350 years ago, it devastated the city of Catania with its molten lava and ashes. Nowadays, you can hike or ride a 4×4 jeep to the top through lunar landscapes and admire the stunning panorama.

Less tall but just as impressive, the Aeolian volcanoes are also worth the ascension.

Stromboli (Iddu) and Vulcano (Vurcanu) are two of the Aeolian Islands in the Tyrrhenian Sea. The sulfur vapor may be disturbing at first, but you’ll get used to it, and you may even enjoy a volcanic mud bath.

The warm mud pools on Vulcano are natural spa with therapeutic benefits. You can also admire the volcanoes from a boat rent offshore. In the night sky, the lava gushing in the starry sky is a must-see.

Volcanoes are not the only natural disasters in Sicily. In 1693, the most powerful earthquake struck the island, and a tsunami followed it. Most towns were destroyed, but the Sicilians were not deterred.

They rebuild whole cities in a new architectural style: the Sicilian Baroque. Among the splendid churches and magnificent palaces, you can visit the Basilica della Collegiata, Villa Palagonia, the Cathedrals in Noto, and Syracuse.

The Palaces built by Sicily’s nobles showcase their wealth. The decorative ornaments on the overwhelming façade and the lush and eccentric interiors show their appreciation for the most elegant styles of the day.

One of the most famous palazzi in Sicily is Palazzo Valguarnera-Gangi. It was the host of many European monarchs. It is also the setting for the legendary movie The Leopard by Luchino Visconti.

Numerous films capture Sicily’s beauty, such as The Godfather, Le Grand Bleu, Ocean’s Twelve, Cinema Paradiso, and the recent Aquaman. Why are so many movies set in Sicily?

Sicily’s historical heritage is well-preserved, and it is not only in the gorgeous architecture and the archeological remains. There are numerous picturesque villages in the mountains and the small Sicilian Islands.

Sicily is the haven for photographers and cineaste. Each charming little town takes pride in sharing their lifestyle and giving visitors a genuine experience to remember. People are very welcoming and accommodating.

Take your time, unwind, and enjoy a coffee at a terrace while admiring the colorful processions during religious festivals and carnivals. You can participate in a variety of traditional events if you want to and appreciate the typical Sicilian habits and customs.

It is formidable to see that the preserved traditions of the past pass to the next generation.

Among these old habits, did you know that Sicilian may be the true inventor of the Bikini?

The mosaics at Villa Romana del Casale show how women wore outfits to compete in sports that look like a proto swimming suit.

With 620 miles (1000 km) of coastline, Sicily is dotted with picturesque fishing villages and charming little resort towns. We could make you a list, but there are too many of them!

If you are sailing in the area, you can also benefit from modern harbors. Here’re Sicily’s top 3 marinas:

Thanks to the volcanoes, Sicily is a very fertile region. Due to its central location in the Mediterranean, it is also the main transit and wintering land for birds and sea creatures such as seals and sea turtles.

In the northwest of Sicily island, Riserva Naturale Orientata dello Zingaro was created in 1981 to preserve the scenic environment and wildlife. The reserve is only accessible on foot, and it includes one of the first prehistoric settlements: Uzzo Grotto houses.

Hike on the path along the coast to enjoy a breathtaking view of Castellammare del Golfo, a romantic seaside town with a perfect sandy beach.

Sicily and the surrounding small islands boast incredible natural gems below the water surface. It is a real scuba diving paradise in the Mediterranean. You should set sail to the north of Palermo for the volcanic island of Ustica.

It is a marine reserve and a fascinating diving spot. Jacques Cousteau once called this small Sicilian island, the “pearl” of the Mediterranean.

The transparent waters are ideal for exploring the black lava seabed, admire gorgonian corals, and swim among a school of fish. Experienced divers can enjoy the famous Sicchitello Cave.

There are other exciting highlights worth exploring when embarking a yacht charter in Sicily such as the Grotta Verde, Grotta Azzurra, and Grotta dell’ Orro, caves, and World War II wrecks.

So, now that you are thinking of a Sicilian Trip, you are wondering where to go.

Others Fabulous Diving Spots in Italy

Sicily’s beautiful capital and glamorous, Palermo is best known for its rich history and fascinating architecture. It holds many attractions like Mount Pellegrino, Cappella Palatina, and the church of Santa Maria dell’Ammiraglio.

This charming city boasts cultural gem dating back to the Greek Antic period. Visit the small island of Ortygia, be amazed by the famous Ear of Dionysius, and explore the Anfiteatro Romano di Siracusa and the Greek Theater.

Settled on a hilltop with a panoramic view on Mount Etna and the Mediterranean, Taormina is famous for its influence on writers and artists worldwide: Goethe, D.H. Lawrence, and Truman Capote. Taormina combines chic resorts and luxury hotels with spectacular monuments like the ancient Greek theater Teatro Antico di Taormina and the Palazzo Corvaia.

Located in the Tyrrhenian Sea, this archipelago includes the active volcanoes of Stromboli and Vulcano. It is a dream destination for sailors that is on UNESCO’s list of World Heritage Sites.

On the Southwest shore of Sicily, Agrigento boasts the island’s most impressive historical attractions, including the Valley of the Temples, the ancient Roman temple Temple of Juno Moneta, the Temple of Concordia, the Monastero Santo Spirito, and the rocky cliff of Scala dei Turchi.

10 places you must visit on a sailing trip to Sardinia

The Most Popular Yacht Charter Destinations in the Mediterranean