Bleu de Nimes is for sale and charter 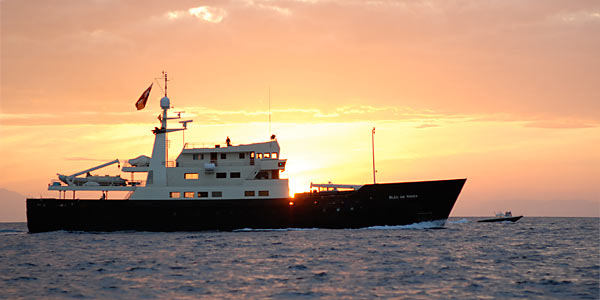 Motor Yacht Bleu de Nimes is a fabulous expedition yacht with all the amenities for diving and deep sea fishing . 21 crew will take care of your needs and pamper your guests.

The owner bought her in 2001 and she was refitted in Turkey, renting a place in a shipyard, doing a contract with all external firms (carpenter welders, mechanics, electrician etc..). Work has been followed by a naval architect. Owner has been able to plan and realized a successful refit as he has been familiar with large Motor Yachts since the early 80’s .

Bleu de Nimes was bought because the trip around the world was planned and because of her construction. The keel thickness is 12mm and the hull plates are 10mm, the plate’s material is steel Lloyd class “A”. It is a no magnetic steel hull so it is not affected by galvanic current. She is in class with the Lloyd Register in compliance with MCA, Malta cross and an unlimited commercial class. The Lloyd special class survey was finished in April of 2011, so the boat is on class until 2016. Special class survey for the hull was done in Cairns Australia. Shafts and propellers were taken apart; hull and fuel tank were sandblasted per Lloyd request. No corrosion has been found in the hull plates.

The maintenance for main engines and generators has been done in accordance to the manufacturer books and without exceeding hours.

Around the world, she sailed 85.000 nautical miles.

The owner suit is 50 square meters.

The cabins are situated on deck number 4, one below the main deck, because of sea kindness and lack of noise

Heli -deck on the bow forecastle.

Gym on the upper deck.

Make Your Visit To Phuket Memorable On a Luxury Catamaran

The Grenadines’ Luxury Yachts of the Month

The British Virgin Islands, the Must See Yacht Charter Spot of the Caribbean