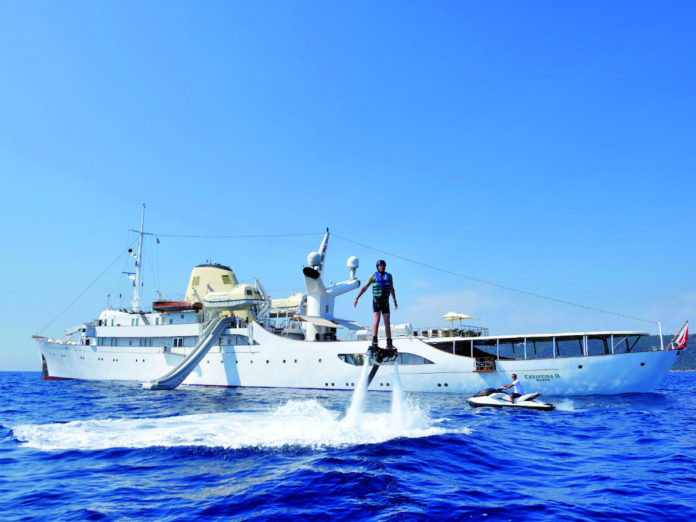 To say that the yacht Christina O has a reputation to maintain would be an understatement.

The vessel is not only a beauty, one of the longest yachts in the world and one of the most impressive conversion to occur in the yacht world. Christina O is also a ship where history was written, and where numerous of the most powerful and famous spent some time.

The conversion of Christina O: from war vessel HMCS Stormont to superyacht

Christina O story is rather unusual. Originally, she belonged to the Canadian army, by the name of HMCS Stormont. The frigate was primarily used as an anti-submarine vessel, and even served as a convoy escort during the Normandy landings.

The billionaire Aristotle Onassis bought her at the end of WWII and transformed her into a luxurious superyacht. He then named her after his daughter Christina. 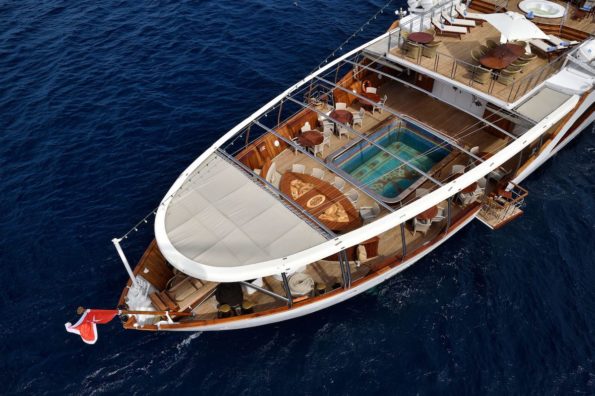 Transforming a warship into a superyacht did not happen overnight. 6 years were necessary to make her fit to host her prestigious guests. Onassis spent 4 million for the conversion at the time, a rough equivalent to 38 million in today’s dollar value. The most extensive conversion ever undertaken for a boat. It did not neglect any part of the ship: wood from the Greek islands in the suites, gold fittings, and blue Syene marble in the bathroom… All of Europe took part in building this iconic superyacht.

One of the most renowned centerpiece of the boat was the Lapis Lounge, a fireplace made from Lapis Lazuli.

Ex Egyptian King Farouk reffered to Christina O as “the height of opulence” and it’s probably an accurate picture to describe her.

Onassis and his yacht Christina: a celebrity magnet

Aristotle Onassis was famous for owning Christina O, but also for throwing regular parties aboard as part of his lavish and decadent lifestyle. Wherever he was sailing with his yacht, he rarely was alone. The list of Christina guests is impressive and includes celebrities that are now part of world history.

Marilyn Monroe, Richard Burton, Frank Sinatra or Liza Minelli were some of the famous artists who stayed on the yacht. Among the business and governing world, familiar names such as John Kennedy, Winston Churchill, Rockefellers, or Princess Grace have been seen on Christina’s decks as well. 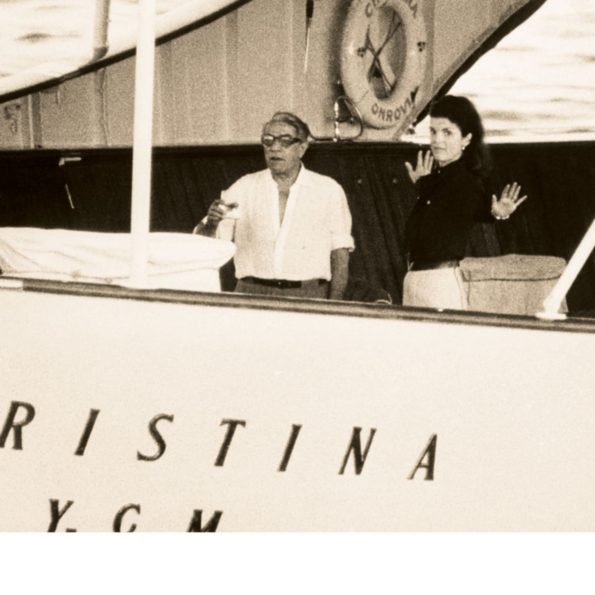 Onassis’s own suite was never given to any of its guests except for one: Winston Churchill. The British Prime Minister during wartime was the only guest of honor to have the privilege to stay in the owner suite. Churchill went 8 times on cruises on Christina, so he must have appreciated the gesture.

After Aristotle Onassis’ death in 1975, Christina Onassis inherited the yacht name after her. In 1978 she offered it to the Greek government.

The Greek government did not use her very long and ended up abandoning the vessel that quickly deteriorated. Ultimately, the yacht was looted and some of its most iconic pieces such as the blue Syene marble bathroom were lost forever.

In 1991, Alexander Blastos bought the boat back with the firm intention to give her a new life. But the purchase never went through due to financial fraud and Blastos never got his hands on Christina O, even after 4 years of trial.

Peter Tauck bought the yacht in 1998 and sold it to a friend of the Onassis family, John Paul Papanicolaou. A new refit was made, and Christina O went back to life. 16 months and $50 million later, Christina O was restored, and ready to be chartered.

Since 2001 and her last refit, Christina O is as prestigious as it’s ever been.

Charter Christina O for your holidays and events

Christina O is probably the most iconic yacht available for charter in the world at the moment.

On top of her rich past, she can host up to 34 guests for an extremely comfortable cruise. She is also suited for events and can host up to 250 guests on its decks.

She is usually chartered in the Mediterranean, especially in Greece, Italy, and on the French Riviera. With its 99m, Christina O is hard to miss and is regularly in the local news when she approaches a harbor or a city outside of her usual ones.

And since then a piece of history available for private charter.

If you are a yacht enthusiast and can afford to charter her, it’s an opportunity you should not miss.

Whether you wish to charter Christina O or another yacht, get in touch with our travel advisors to discuss your projects.

Charter the perfect yacht for your next escape