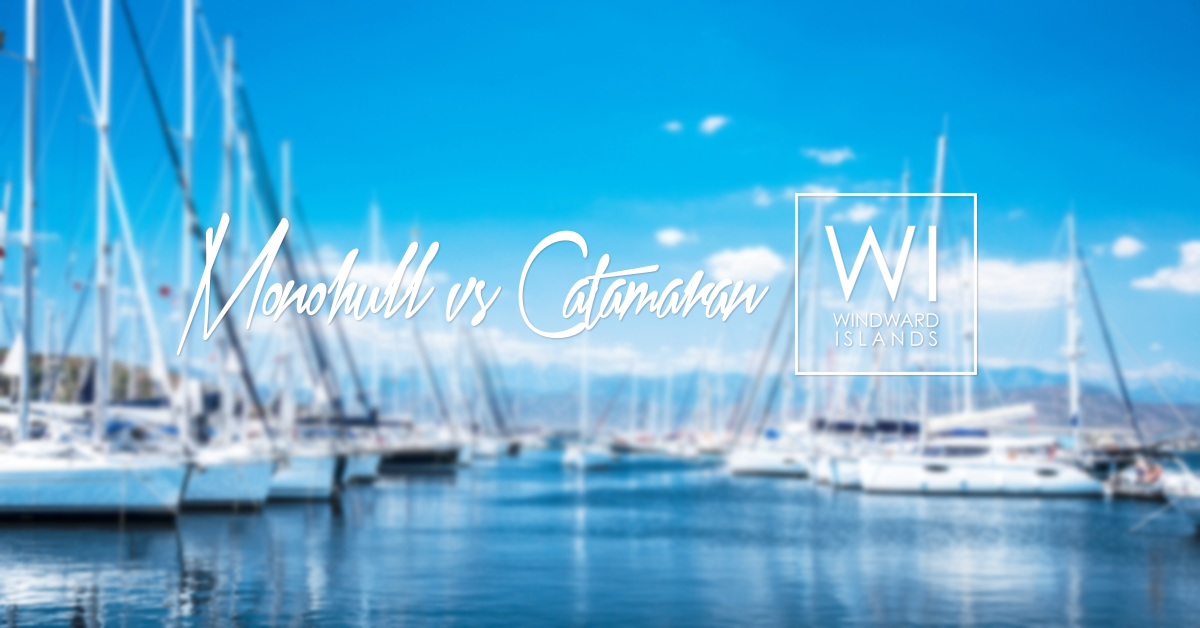 The monohull vs catamaran debate isn’t anything new in the sailing world.

Although it may seem trivial to many of you, choosing between a monohull vs a catamaran isn’t as straightforward as it seems. Which one to pick? Which one is faster, safer, more comfortable?

You always want the best compromise when picking your yacht for your cruising project.

Let’s compare monohulls and catamarans of equivalent size to see which is best for you. Although it is true that during the last decade there has been a great craze for catamarans, who know, you might decide to go for a monohull sailing boat after reading this article.

Unlike a monohull, a catamaran consists of two shells, linked with a frame and unlike a monohull, it does not have the lead keel, therefore it is generally faster than a similar-sized monohull, especially off the wind. Most of the catamarans on the market are designed for trade wade sailing, therefore, they sail very poorly. On the other hand, under light wind, most catamarans will often be slower than similar-sized monohull due to wetted surface drag.

Some shipyards are known to build high-performance luxury catamarans such as Gunboat, the innovative trimarans from Neel, the powerful Outremer catamarans, or the centerboard type of catamarans from Catana group. 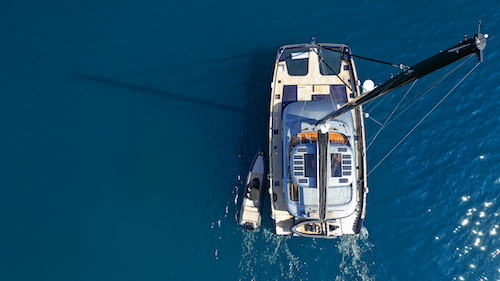 The differences in stability between a catamaran and a monohull

Catamarans do not roll from one wave to the other as a monohull does. They rarely tilt more than 5 degrees, so the navigation is less tiring, and guests can eat, sleep and live on the catamaran more comfortably than on a monohull with fewer opportunities to catch seasickness. Walking on the deck of a catamaran is also easier because the boat is flat.

On a monohull, from the early puffs, the boat starts to heel naturally and for many boaters and sailors, it is the exact definition of the charms and pleasures of sailing.

Most catamarans have a draft of about 1 meter, allowing anchoring near the coast. This will be possible only with a centerboard keel in large monohulls such as luxury sailing Vitters Sharlou. If you wish to anchor in the lagoons of the Caribbean near the beaches, a catamaran will be more suitable.

Concerning mooring in a marina, because of their two hulls, catamarans are wider than monohulls, which increases the costs of dockage if they can find a place there! Large multihull Motoryacht such as 68ft Sunreef supreme will be limited in the choice of marina dockage during high season. This beaminess also limits the choice of shipyard services for repair and maintenance.

If you charter a yacht with Wiyachts, your adviser together with your crew will be able to check the best marina and anchorage spots for you.

Comfort : a clear win for the catamaran?

This is the first word that comes to mind when speaking of catamarans mostly because it does not heel, they will roll from beam to beam as well as fore and aft. For example, you can cook underway in a more pleasant way compared to the sailing monohulls.

While the heel of a monohull can look impressive, there will be very little pitch fore and aft, then guests will be less prone to seasickness, and while sailing you won’t have this slapping noise that can be surprising if you are not used to it.

At equivalent size, the volume and space you can achieve in a catamaran in unquestionable: The main living area is on the same level as the cockpit. Unlike a monohull, a catamaran sailor accesses the bright living room directly from the cockpit. This makes walking around the deck while underway safer and easier. The cabins are also wider in the cat, and it will be easier to sleep aboard a boat that does not heel.

But the most important advantage for the passengers remains access to the sea via the two skirts of the hulls much easier than on a medium-sized monohull.

Under sail, a monohull is much more maneuverable and tack faster than a catamaran. On the other hand, it is easier to dock catamarans since they have two engines. 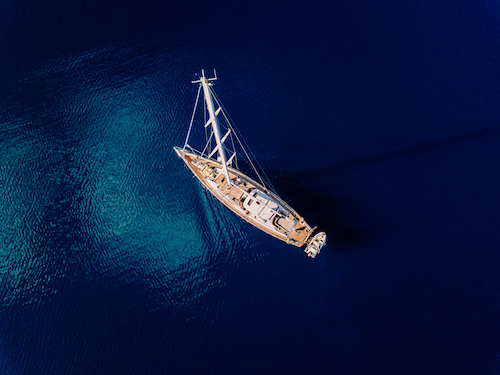 If you are a family or looking for comfort, space, and stability, a catamaran will probably be a better choice. If you fancy authenticity, tradition, and esthetic for your sailing vacation with an unprecedented rush of adrenaline, no other boat can beat a monohull.

Ultimately, the choice between a catamaran and a monohull is yours. It really depends on the tupe of experience you are expecting for your yacht charter.

If you are still unsure about which type of boat is right for you, we can give you our advice on the best boat to charter or buy based on the details of your projects.

Take advice from people who know the areas and trust the professional crews! There are destinations such as the Bahamas that have to be sailed with a catamaran (or motor monohulls, motor yachts) due to the shallow sea. We recommend on the other hand to experience the Greek islands with a monohull to take full advantage of the wind and its sailing capabilities.

Our selection of sailing catamarans

Some of the finest catamarans we love: Lagoon 560 Zylkene 1 in the Mediterranean or the Caribbean from 18 000€ per week, 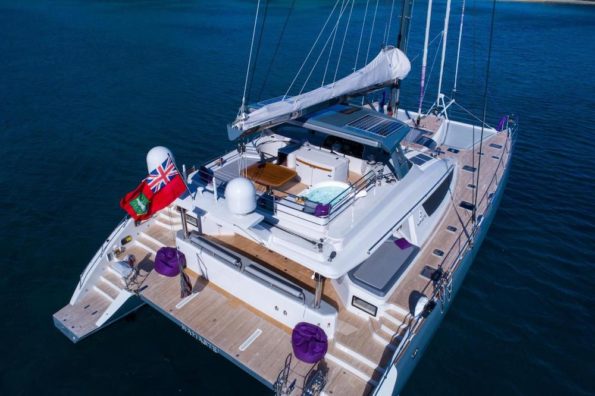 or the Privilège series 7 Namaste in the Caribbean from $60 000 per week.

Our selection of sailing monohulls

Our choices for sailing monohull available for charter are the CNB sloop Grand Bleu Vintage from 39 000€ weekly, beyond elegance the Vitters Sharlou from 105 000€ weekly, 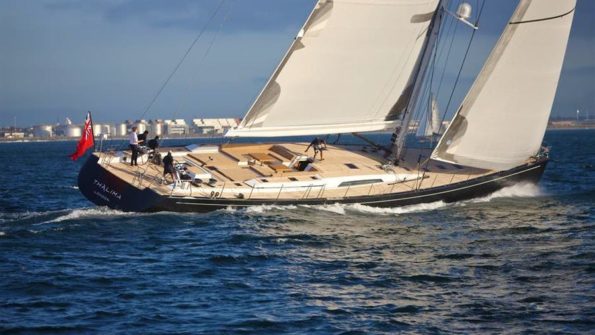 The southern wind Thalima available in the west Mediterranean from 58 000€ weekly.

Do not hesitate to ask us for advice to choose the right boat for you above all. Contact us.

FAQ regarding differences between monohulls and catamarans

Which one is more comfortable: a monohull or a catamaran?

Catamarans are generally more stable than monohulls and are therefore considered more comfortable.

Monohull vs catamaran: which one is more stable?

Catamarans do not heel the same way monohulls do, so they feel more stable and are less prone to make you seasick.

Should I choose a catamaran or a monohull if I have sea sickness?

Since monohulls heel more than catamarans, we advise you to choose a catamaran if you know you are prone to sea sickness.

Which is faster between a catamaran and a monohull?

Generally speaking, catamarans are faster than similar monohulls since they don’t have keel. That being said, they tend to be slower under light winds, and will never equal the performances of a racing monohull in rough conditions.

Is it cheaper to moor a catamaran or a monohull?

It is usually cheaper to moor a monohull as they use less space than catamarans. But catamarans can be comfortable and cheap options as long as you avoid mooring in a marina.

Is sailing a monohull nicer than sailing a catamaran?

To each their own. But sailing a monohull is an authentic sensation that is hard to replicate on a catamaran. Catamarans are usually chosen for their comfort rather than for their sailing performances.

Which is better: a catamaran or a monohull?

If you like comfort, space and travel as a family, you will likely prefer a catamaran. If you want an authentic experience, traditional esthetics and your adrenaline running high, then you will love the monohull.