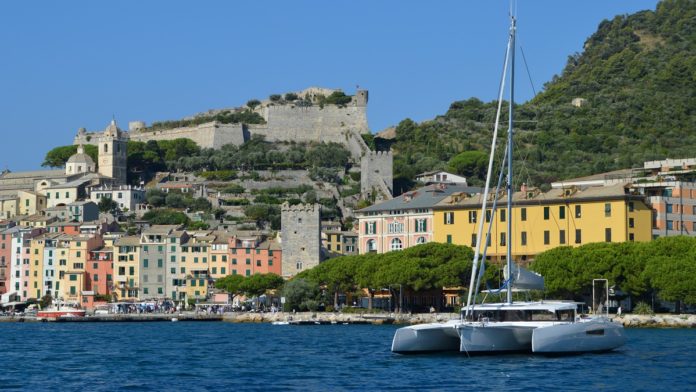 Trimarans have been around for a while, yet racing aside they are not as popular as some other types of boats, especially in the multihull segment largely dominated by catamarans.

It is a shame as sailing a trimaran can be a very thrilling experience, even for the most relaxing yacht trips. Three words define it perfectly: Stability, Speed, and Lightness.

What is a trimaran?

A trimaran is a type of multihull boat composed of three individual hulls.

The center hull is the largest part of the boat, and the other two are floats designed to keep the boat stable by connecting to the center hull through an arm.

A brief history of trimarans

It is reported that the first trimarans were built by cultures in Asia and the Philippines. It is still the traditional fishing boat today in these parts of the world.

In the 16th century, the first trimaran (and catamaran) prototypes were “Proa” – tiny boats with two parallel hulls. The islanders used these boats in the Pacific Ocean.

Then, the amateur development of the modern sailing trimaran began in 1945 with the efforts of Victor Chetchet, a Ukrainian immigrant to the United States, who built two trimarans out of marine plywood that was later credited with coining the term “trimaran.”

Recreational trimarans grew in popularity in the 1960s and 1970s.

Until the ’90s, the trimaran was mostly chosen by sailors looking for performance.Modern trimarans, however, differ from the popular multihulls of that period in terms of design, speed, and “stuffing.”

In the last 30 years, many Trimarans ranging in length from 19 to 36 feet have been designed and built. Most of these trimarans could be folded and transported in trailers.

Trimarans quickly became a popular mode of transportation. Benchijigua Express, a 127-meter trimaran, was delivered to Spain in 2005. There were 1280 people and 340 automobiles on board! It was the world’s longest aluminum ship at the time, with a peak speed of 40 knots!

Likewise, things have changed in recent years. The cruising multihull market has developed enormously, with trimarans reaching very appreciable cruising levels, such as the new Tricat 30 or, for larger budgets, the Neel 45.

Why choose a trimaran?

Trimarans are faster than monohulls or cruising catamarans of the same size. They are also undoubtedly even more stable and secure than a catamaran.

They are masters of competition and records for a reason. For example, Thomas Coville held the world record of 49 days and 3 hours of the solo round the world race on the trimaran Sodebo Ultim.

Thanks to its central hull and two smaller outrigger hulls, its three hulls give the trimaran very high stability. During the navigation, the trimaran goes upwind better than a catamaran, which is more prone to drifting phenomena. Therefore, Trimarans are faster.

The renowned NEEL 65, for example, is an atypical and innovative trimaran. Its capacity has been increased to provide roomy staterooms, and its center hull, which is precisely aligned with the mooring line, ensures stability and comfort when at anchor.

The wind propels a sailboat ahead and causes it to tilt in one direction. The keel under the hull prevents the boat from drifting and the ballast from capsizing in monohulls. As a result, a monohull will list in heavy winds.

Multihulls, on the other hand, benefit from their floats, which can withstand submersion. The catamaran will cruise quietly and will not heel like a monohull, but it will be unpleasant in rough waves.

In contrast, the trimaran’s three hulls provide excellent stability, similar to the little wheels added to a bicycle. The shape of the floats makes recreational trimarans especially stable and enjoyable to sail even in severe waves.

The trimarans offer a real sailing experience in the heart of the ocean racing world. They also allow you to meet with passionate people that will share their technical knowledge, experiences, and adventures with you.

If you choose a cruising trimaran for a luxurious vacation, your experience will be just as enriching. You will enjoy large living spaces, incomparable stability, relaxing safety, and quality crew service along with true sailing sensations.

The wind and the performance

When the wind pulls a boat upwind or the side, it is essential to offset the wind’s drive, and the hull and daggerboard provide this compensatory thrust.

As compared to a catamaran, a trimaran is more capable of sailing upwind. Thus, trimarans are quicker than catamarans, and this advantage is especially noticeable while sailing against the wind due to the weight centering in the middle hull, which reduces pitching.

Among all the multihulls, the trimaran is the safest because of its three-hull design, comprehensive anti-drift scheme, and weight centering.

Furthermore, even if the trimaran were to capsize, the construction would keep it from sinking, making it an extremely safe watercraft.

That being said, all multihulls, including catamarans are generally safe and easy to maneuver as long as you do it correctly.

When it comes to racing, trimarans are more popular than catamarans, especially over the last 10 years.

Racing trimarans provide significant speed and safety benefits in extended offshore races. Even in severe seas, they can be pushed harder and are more forgiving than other racing catamarans. These are the primary reasons why trimarans have become so popular in recent multihull competitions.

Read also : Trimaran VS cataman: What are the differences ?

Who can benefit the most from using a trimaran?

There are many different types of experiences possible with a trimaran, so many people will find a trimaran to their liking.

The racing enthusiast ready to take on the world, the sailor with a thirst for adventure, or the cruising family, will find the trimaran right for their project.

The biggest drawback to trimarans is their living space. Indeed, most of the models on the market have a living space centered only at the level of the central hull, and the other spaces are rather limited. This is especially true for racing trimarans.

The only manufacturer who offers a solution to this problem is NEEL, with trimarans having large and comfortable living spaces.

If trimarans aren’t the most popular yachts on the charter market (yet!), it doesn’t mean you should refrain from renting one if you want to discover the sailing experience of a boat with three hulls;

Why should you charter a trimaran?

WI Yachts offers you 5 good reasons to charter a trimaran:

The best destinations to charter a trimaran

BVI: Between the nearby highly cosmopolitan US Virgin Islands and the pristine British Virgin Islands, there are more than 60 islands. They feature several sheltered anchorages and are ideal sailing grounds for first-time charterers or families. Coral reefs and gorgeous beaches may be found all around the archipelago, offering a variety of water activities.

Martinique: When it comes to variety, Martinique excels. Travel north to enjoy the magnificence of the mountainous landscape. Or sail south to relax on the island’s best white sand beaches. Protected by a coral reef, this is a magical sailing ground for your charter yacht vacation.

Known as the island of flowers, Martinique is a French overseas territory. It is also one of the largest islands in the Lesser Antilles.

Saint Martin: Sint Maarten is part of the Kingdom of the Netherlands, while Saint Martin, the northern half of the island, is a French overseas collectivity. A popular stop for Caribbean cruise ships, the island is known for its lagoons, beaches, and colonial-style architecture.

Guadeloupe: Guadeloupe is a small butterfly-shaped island divided into two main islands: Basse-Terre and Grande-Terre. Separated by a narrow channel and connected by a bridge, the two islands are very distinct. This French overseas department lies in the middle of the Eastern Caribbean, between Dominica and Antigua. Charter a yacht in this part of the Lesser Antilles and discover a unique blend of European and tropical cultures.

Seychelles: Seychelles are all varied, and each offers a personal vision of Paradise. You can explore them all during your cruise thanks to the short sailing distances. The Seychelles yacht charter area extends to the islands of Mahé, Praslin, La Digue, and twenty smaller islands. Beautiful lagoons, white sandy beaches, and a wealth of marine life make Seychelles a unique cruising destination.

How much does it cost to charter a trimaran?

It is possible to charter a trimaran no matter what your budget is; a bareboat trimaran NEEL 45 can be chartered from €3 400 per week.

All our trimaran for charter here.

Buying a boat, regardless of the type, depends on the intended navigation. For a cruising-oriented program, we often think of the monohull or the catamaran. The trimaran market seems more naive, yet cruising aboard a trimaran can be an excellent alternative.

However, trimarans are now able to provide all the necessary comfort for each cruising project.

On the other hand, when it comes to determining trimaran costs, most people make a mistake in their value evaluation. Rather than comparing lengths, the underlying value is found in the cost per knot.

Besides, a trimaran will outperform a monohull boat of the same length.

How much does it cost to buy a trimaran?

You can buy a trimaran for about $959,959. With 75 HP engine, fiberglass hull material, this trimaran will have 8.9 meters of the beam and 1.8 meters of draft. It houses 4 guest cabins and 2 crew cabins.

Among the best trimaran builders we can find:

Neel: The trimarans of the shipyard are unique thanks to the experience and unequaled know-how. They combine unequaled living comfort with incredible sailing pleasure.

Rapido trimarans: Its creator has always been convinced that there was a missing segment in the sailing market: a cruising trimaran at sea, piloted by its owner, powerful enough to accelerate and avoid any potential problem, and able to be sailed safely by two people. This is how their concept was born: to build the fastest production cruising trimaran in the world.

Dragonfly: The shipyard offers 4 models, from 25 to 40 feet, with different touring, sport, performance, evolution, or ultimate, which allows everyone to find a trimaran to suit his needs.

Corsair marine: Created by a New Zealand architect in California, Corsair has built more than 1,200 folding trimarans between 1984 and 2008, making them the leader in this segment.

The best trimarans currently on the market

There are two types of trimarans that currently stand out on the market — those for coastal raids and those for cruising.

The Tricat 25 for summer cruising or day trips

The Dragonfly 40, for simple offshore cruising