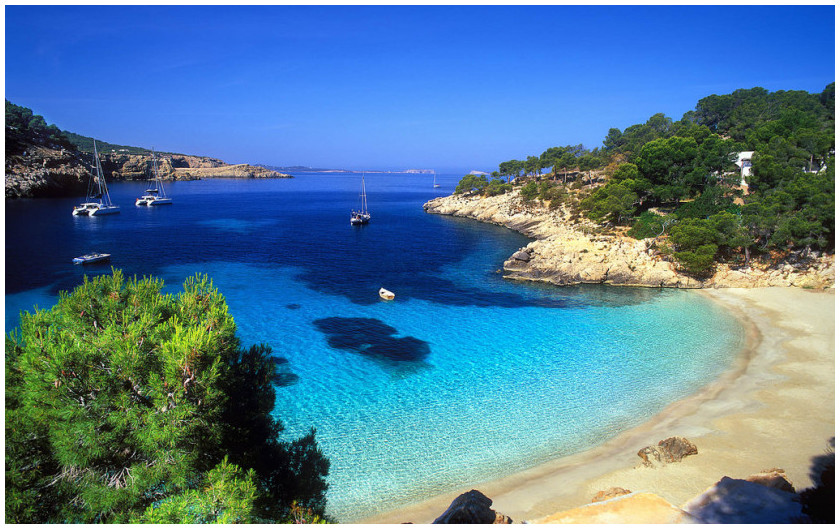 Chartering  a boat in the Balearic Islands, especially in summer, is a choice that will allow you to enjoy magnificent views, a crystal clear sea, an azure blue sky, powdery white sandy beaches and a sunny Mediterranean landscape.
In short, all the ingredients for a dream holiday.

The most popular attractions in the Balearics

The Spanish Balearic Islands consist of four magnificent islands, each with its own character. Mallorca is famous for its glorious churches, ancient villages, inspiring monasteries and pristine sandy shores.
A Smaller and more relaxed island, Menorca, offers a quiet escape for those who love the seaside, nature and the countryside.
The island of Ibiza is renowned for its lively atmosphere and beautiful beaches, but it is distinguished by its old city, listed as a UNESCO World Heritage Site, one of the most picturesque sites in Spain.
For those who enjoy relatively unknown destinations, Formentera Island offers sheltered coves with isolated beaches and a UNESCO World Heritage Site marine nature park that protects more than 10,000 hectares of land and seas.

1. The old town of Eivissa (Ibiza)

One of the most beautiful villages in Spain, listed as a UNESCO World Heritage Site, is the old town of Eivissa, a former medieval fortified city. Here, tourists can discover a dream Mediterranean scene composed of charming whitewashed houses that flow into a lively waterfront. This small picturesque medieval world is perched on a hill above the rest of the city, surrounded by immense fortifications. The ramparts were built in the 16th century at the top of the remains of the Moorish ramparts, with three gates and seven corner bastions. The main entrance door is the Puerta de lasTablas with the coat of arms of King Philip II. The footbridgenowhousesthe Museum of Contemporary Art.

Within the old walls, Dalt Vila is a picturesque labyrinth of narrow cobbled streets, pedestrian alleys and large historic houses.

Originally, the cathedral was built in Gothic style, but it was renovated in the 18th century in a Baroque style.

Visitors are charmed and impressed by the austere and imposing exterior with its large buttresses. From the terrace on the south side of the cathedral, tourists can enjoy the magnificent view of the bay.

Palma de Mallorca, the seaside capital of the Balearic Islands, offers beautiful beaches and historical and cultural attractions. This elegant city is located in the Bay of Mallorca and enjoys mild and sunny weather all year round.

Overlooking the old port, the cathedral creates a magnificent impression on the other side of the bay with its arrows and towers overlooking the city.

The Almudaina Palace is another major tourist attraction, originally a Moorish fortress that was converted into a royal residence for Catholic rulers in the 14th century.

Lonja’s lively fish market in the picturesque port and Plaza Mayor, the city’s main square, are also worth a visit. After visiting the tourist sites, many tourists head for the beach.

Palma de Mallorca offers several excellent beaches, including Cala Major, near the Miró Museum; Playa de Palma, a popular beach 10 kilometres from the city; and adjacent to Playa de Palma, Playa del Arenal, a large beach with a yacht club where you can rent a boat for a day.

3. The magnificent beaches on the island of Formentera

Less touristic than Ibiza and Mallorca among the Balearic Islands, the idyllic island of Formentera offers a peaceful escapade into nature.

The steep and unspoilt coast is punctuated by spectacular cliffs that descend to beautiful beaches. Most beaches benefit from an isolated and well protected environment, conducive to relaxation. 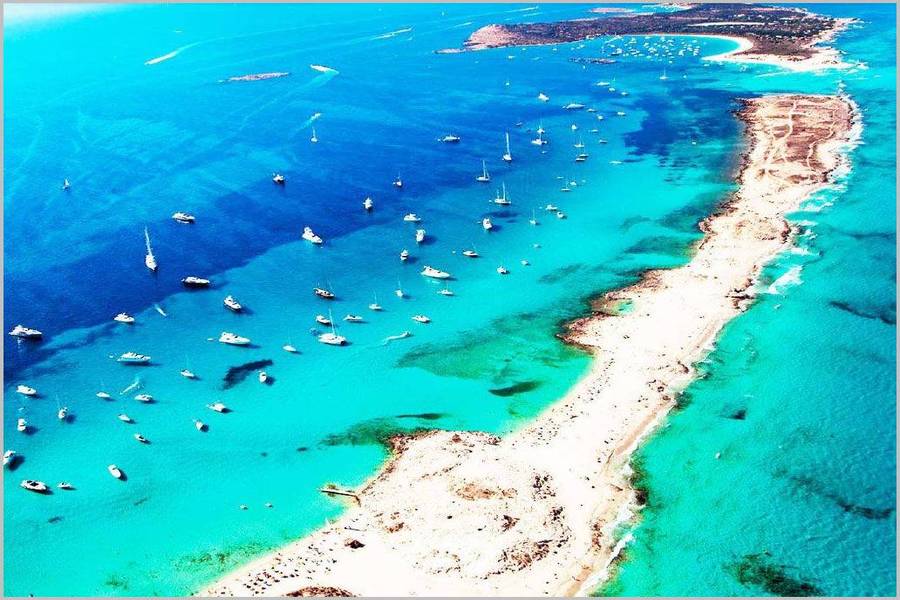 Located in a quiet bay, Pujols beach has a wide coastline of fine white sand and calm waters ideal for swimming and water sports. This beach also has a promenade where people walk during the day and in the evening.

Near the cities of SantFrancesc and La Savina are two fantastic beaches: Llevant beach is a lively scene of sunbathing, restaurants and water sports enthusiasts. Illetes Beach is located in a charming location with a breathtaking view of the sea and the island of Ibiza.

Other small islands off the coast are close enough to be reached by swimming. Adding to the charm, the area around this beach has not been overdeveloped, which gives a feeling of serenity and tranquility.

4. The charming medieval fortified town of Alcudia (island of Mallorca)

Among the cultural attractions not to be missed in the Balearic Islands is a visit to this fortified medieval town that offers the charm of Old World Europe. The historic district of Alcudia, enclosed within the former defence walls, offers an enchanting world of cobbled pedestrian streets and picturesque historic buildings.

As visitors stroll through the city, they will notice many beautiful churches and old aristocratic houses with Renaissance coats of arms and windows. 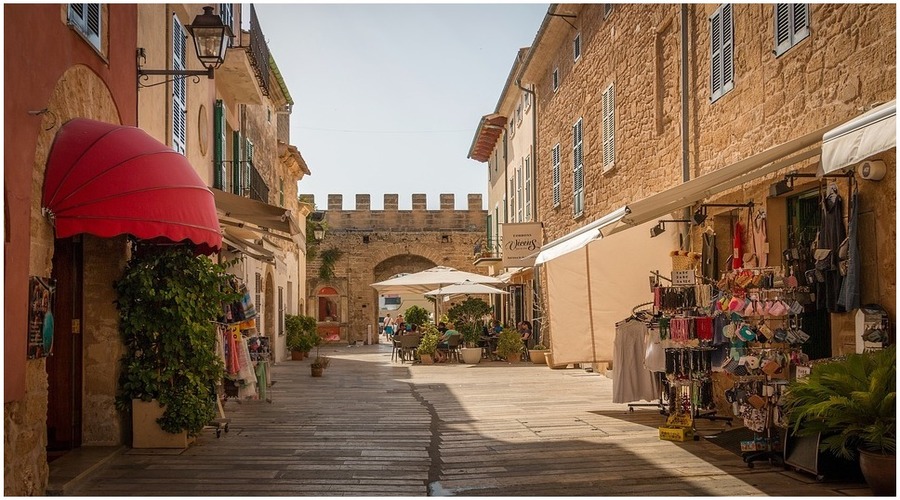 Alcudia also has many friendly restaurants and cafés with pleasant outdoor terraces.

Another interesting attraction near the church of SantJaume is the archaeological site that represents the Roman town of Pollèntia dating from the 2nd century BC. The site contains the remains of ancient Roman houses, a theatre and a forum. The Pollentia Museum exhibits artifacts discovered during archaeological excavations nearby.

Alcudia is renowned for its traditional festivals and cultural events, such as classical music concerts. On Tuesdays and Sundays, the city hosts a farmers’ market where fresh produce from the local countryside is sold. The rural area around Alcudia is a charming place for tourists to explore by bike or car.

Valldemossa is a village perched on a hill in the Tramuntana mountains overlooking the Mediterranean Sea. This quiet country village is surrounded by wooded hills, orchards and olive groves. Visitors enjoy strolling through the cobbled streets and admiring beautiful old stone buildings decorated with potted plants. 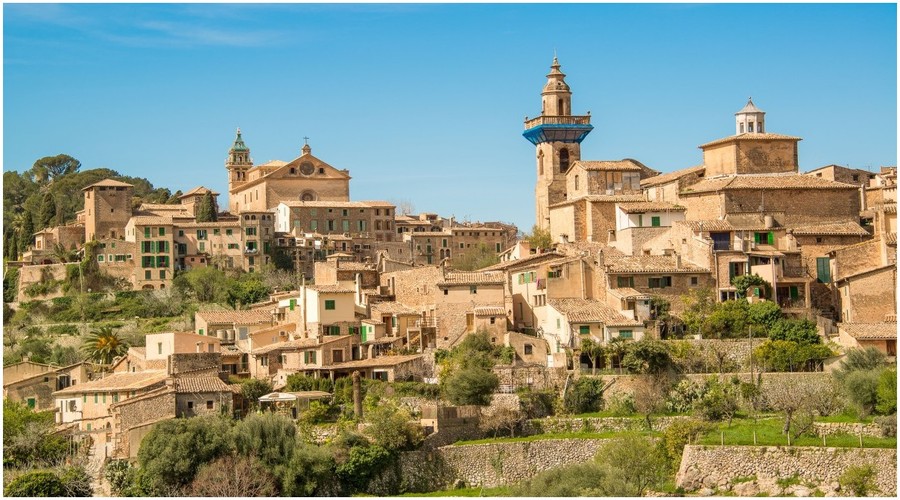 Most of the charming pedestrian streets are lined with cafés, shops and art galleries. The breathtaking view of Valldemossa is the Real Cartuja de Valldemossa, a medieval monastery in Chartreux that was originally built as a royal residence in the 14th century. The famous French-Polish composer Chopin rented a room there with novelist AuroreDupin (George Sand) during the winter of 1838-1839; they were both artistically inspired by the beauty of the monastery and its serene natural setting.

The port of Valldemossa, a former fishing village with a beautiful port, is also part of the municipality. This region is known for its delicious seafood cuisine. Locally caught fish is combined with fresh produce from the surrounding farms, creating mouth-watering dishes.

Classified as a UNESCO World Heritage Site, SesSalines Natural Park is a maritime nature reserve that encompasses the southern part of the island of Ibiza and the northern part of the island of Formentera, as well as the maritime channel that separates the two islands. The majority (75%) of the natural park is covered with water and represents 9,000 hectares of the park, compared to 2,838 hectares. 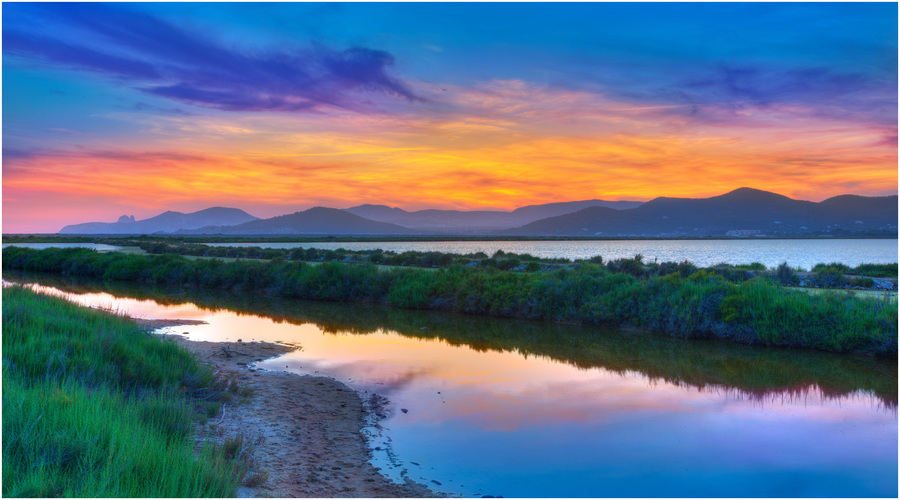 An interesting feature is the extent of underwater meadows with aquatic plants that can only be found in the Mediterranean. These underwater environments allow a diversity of fish and other organisms to thrive. The other aspect of the park concerns the land covered with Mediterranean shrubs, coastal pines and rare cliff vegetation.
Bird watchers will be delighted by the observations, with more than 200 different bird species installed in this park. Flamingos, black-winged stilts, Audouin’s gull and Balearic shearwater can be seen here. There is also an abundance of animals, such as lizards, unique species of native snails and beetles.

This rare prehistoric site is located five kilometres west of Mahón, in a rural landscape of breathtaking beauty. The megalithic monument, Talatí de Dalt, is a room surmounted by a thick stone slab supported by a central monolith. Built in the Bronze Age (around 1300 BC), the Talatí de Dalt is an architectural structure of one of the most important prehistoric villages on the island of Menorca.

8. Mahón: capital of the island of 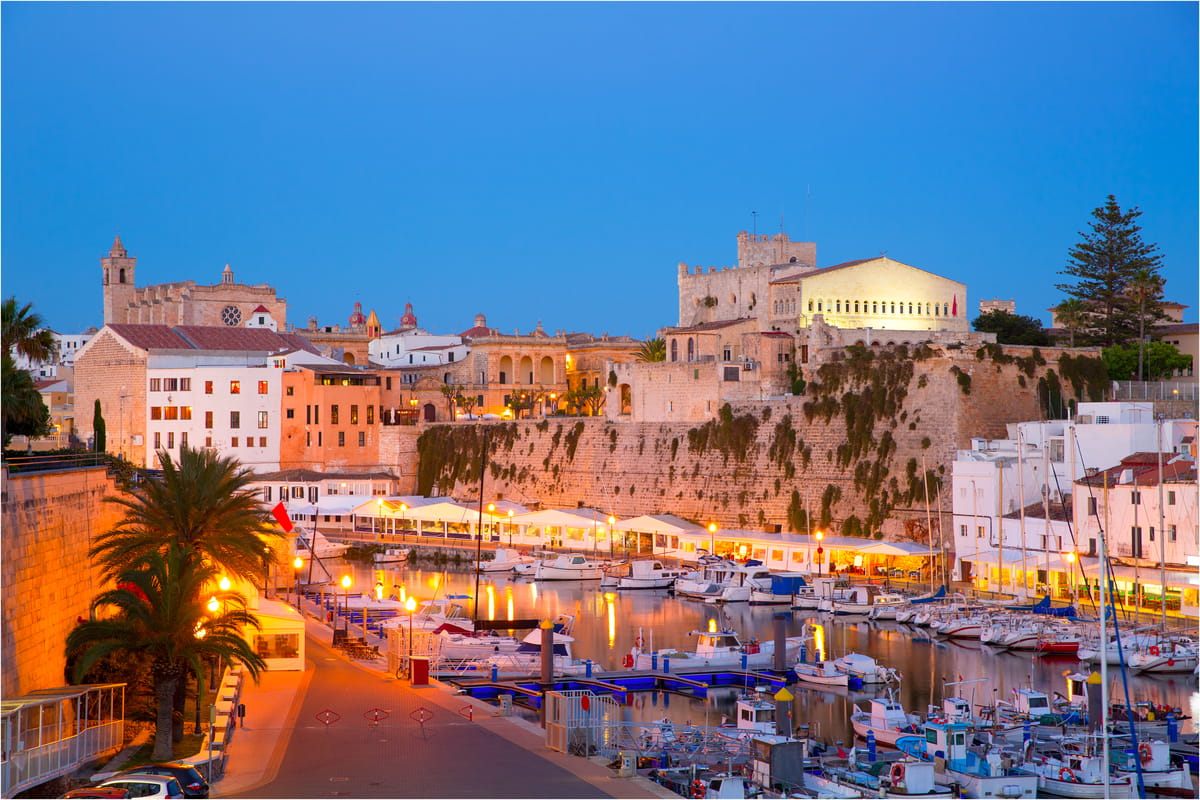 Mahón stands dramatically on the edge of a cliff at the eastern end of the island of Menorca. The city was founded here for strategic purposes, as it has an excellent natural harbour and a protected location, protected from wind and weather.

Visitors arriving by sea will be enchanted by the scenery as the boat passes through ancient forts, islands and coves towards the port. Mahón is a relaxed city with a slow pace that families with children will appreciate.

Stroll through the old streets while enjoying the sea view. Be sure to stop at Plaza de España, a spacious square where a traditional market is held under the arcades of a former Carmelite priory. The square is topped by the Iglesiadel Carmen, an impressive neoclassical church built in the 18th century.

For a better view of the harbour, head towards Plaza Miranda via a narrow staircase alley from the Rampa.
At the beginning of September, the city organizes a lively religious festival in honour of the Virgen de Gracia, with parades of bands and colourful celebrations.

In the Balearic Islands, Puerto Portals is the place to see and see again in Mallorca. This glamorous seaside resort attracts a chic clientele who appreciate flashy cars, luxury yachts, trendy restaurants and luxury boutiques. 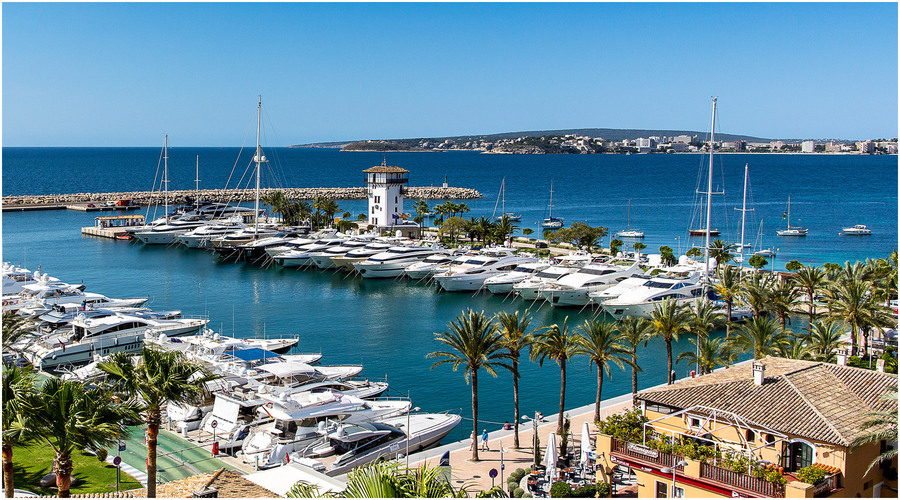 Attracting an international crowd of stylish visitors, Puerto Portals has the atmosphere of Monte Carlo in Monaco. Along the picturesque marina, visitors will find a yacht club and many elegant restaurants. The most famous restaurant is the starred restaurant Tristan. Other options include the Ritzi restaurant with its pleasant outdoor terrace and the Cappuccino bistro overlooking the marina.

At the northern tip of the island of Ibiza, Cala Portinatx is a popular holiday area with beautiful beaches, excellent sailing opportunities and surf schools. 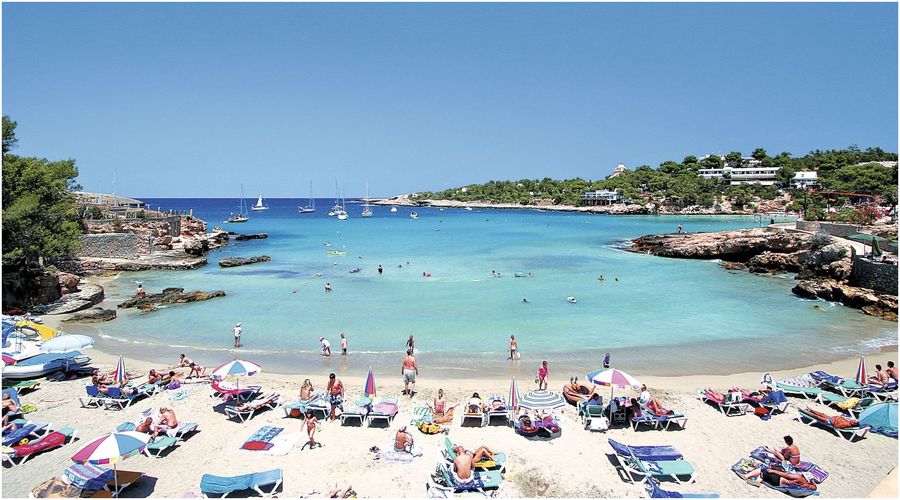 CalaPortinatx Bay is sheltered from the open sea by a rock barrier that protects from the tides and ensures gentle waves. Divers willenjoy the crystalclear waters.

10 places you must visit on a sailing trip to Sardinia

The Most Popular Yacht Charter Destinations in the Mediterranean